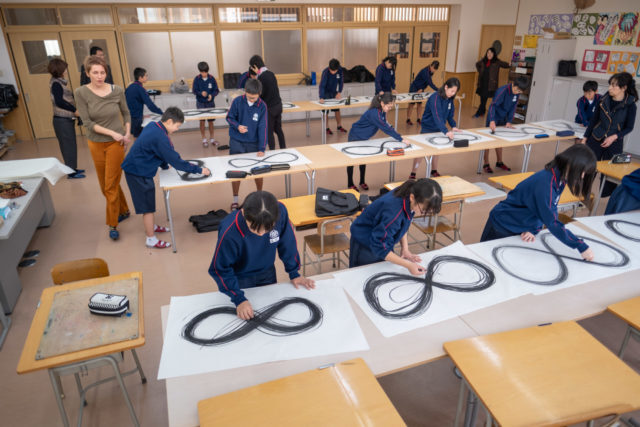 This work combines the medium of drawing and video in a performative collaboration between Radim Labuda and myself. In reaction to the video projected onto paper, the artist writes, smears and erases sayings or expressions that have been collected over time. She reacts to Gustav Meyerink’s quote about the process of catching fish in his novel Golem. The fish is slipperly as quote describe, same as thoughts hard to catch. The aim of the words that are being written is to re-establish the connection between body and mind, silencing inner dialog by a thought catch.

he Death of Thoughts is an experiment to see how a meditation practice can be performed through the symbolic exorcising of daily, reflective thoughts. The improvised play of associations is intended to open questions on human condition.

In her performances, installations, videos, drawings and texts, she develops a complex visual language focusing primarily on female identity.

In 2018 she was shortlisted for the Jindrich Chalupecky Award and took part in a group exhibition at the National Gallery in Prague. She realized Exit The Loop, the Facade Project for the Kunsthalle Prague. In the same year she received a prize from the Kupferstich-Kabinett for her work in dialogue with Rembrandt’s drawing and print graphics. It was followed by a commission from Kunsthalle Prague and drawing performance at the landing of the National Theater in Prague (Living Kunsthalle).

She was nominated twice for the Czech Award for Young Czech Artists (2014, 2015). Her work was presented in the exhibition series “Somewhere in Between-Contemporary Art Scenes in Europe” at the Contemporary Art Center (Riga),the Bozar (Brussels) and Bunkier Sztuki (Kraków). She participated in group exhibitions at Brno House of Arts (Brno, 2016), Label201 (Rome, 2015) and Muzeum Współczesne (Wrocław, 2016). In 2016 she realized “The Virtual Cave and the Golden Cage” in the Zwitschermaschine, Berlin as part of the Berlin Art Week and participated in the group show “Decalogue IV”,curated by Eugen Blume at the Guardini Galerie, Berlin (2014).