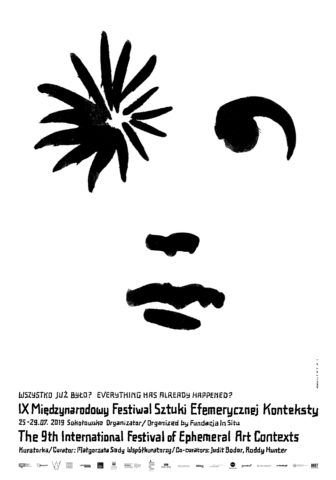 Has everything already happened?

Two thousand years ago Rabin Akiba ben Josef concluded that “Everything had already been”. Greek philosophers (the Milesians, the Pythagoreans, the Stoics, Heraclitus, Anaximander) shared this view, when they referred to the beliefs of ancient Egyptians, who claimed that everything repeats itself mutliple times – eternal return. Nietsche continued with this concept in modern philosophy. He perceived time as cyclical and matter as returning to the same state.

Contemporary art stems from the tradition of past creation, it draws from it and is integrated into its continuum. Artists somehow feel the obligation within themselves to create something new, preferably a breakthrough, new trends, directions, qualities. But is it possible? Can they create an absolutely original work isolated from context? Does the feeling of novelty come from unfamiliarity with history of art?

So are we reinventing the wheel? Are we putting a new disguise on the same body? On the one hand, „what already had been” serves as an inspiration for contemporary art and on the other hand, seeking artists/experimenters and avant-garde artists are opposing tradition. There is no doubt that we do not live in an era of breakthrough in art, like it was at the beginning of the 20th century or in the 60’s and 70’s. New versions of previous appear, focus shifts, attention is drawn to other aspects. Of course, given the circulation of information, globalisation of culture and development of new technologies new possibilities open up. Plagiarism is another issue. To what extent is referring to an earlier work still creative approach and when does it become imitation and abuse. We should keep acquiring knowledge and learn to respect what „had already been” and seek „other things”.

The desert grows, woe to him who bears desert within himself. (F.Nietzsche)

I have seldom seen so much inventiveness combined with so little talent. (L.K.)

Kitsch is always in the process of escaping into rationality. (H.Broch)

Dada fell like a raindrop from Heaven. The Neo-Dadaists heave learned to imitate the fall, but not the raindrop. (R.Hausmann)

The new art is a contribution to art criticism. (H.Rosenberg)

Like a joke without humour, told over and over again until it begins to sound like a threat. (ibid)

Advertising art which advertises itself as art that hates advertising. (ibid)

No such permanence, only becoming
No such permanence, only becoming’ is a curatorial project considering impermanence in its cultural, economic, environmental, personal and political terms. Directly citing Alexander Trocchi’s 1962 essay, ‘The Invisible Insurrection of a Million Minds’, the project invites artists to explore ephemerality as a way to ‘reject the conventional fiction of ‘unchanging human nature.’’ Given apparently increasing and persistent uncertainty in the post-millennial world, however, do we still value and understand impermanence as we have done in the past? How do we reflect upon the radical impermanence of belief systems, political frameworks, collective morality or environmental extinction and irreversible collapse? In what senses can impermanence still be valued as an avantgarde strategy against hegemonic orthodoxy, as an impactful critique of economic commodification and materialism? We invite artists taking a performative and self-reflexive approach to working across a range of media to create cross-disciplinary and hybrid art practice to respond to the dilemma and opportunity of impermanence in the early 21st century.